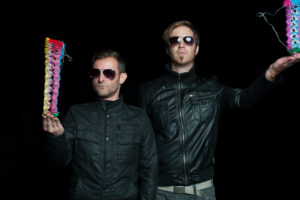 Who is the KFD and why is their debut album called “The Greatest Hits”? you may ask and right you are to do so. Well if you are mature enough to stomach some hard facts, read on …

a) The Kung Fu Divas are two guys – sorry, no acrobatic ladies ready to break vour bones here.
b) They make music since 2004, before that they used to DJ together.
c) Those two guys hail from Vienna, Austria, and most of their guests on this album do, too. But Sweden and the US also play supporting roles.
d) This first album compiles all singles so far, a handful of remixes and two brand new tracks. The whole thing will take hearts, minds, glands and all the rest in storm, rest assured. 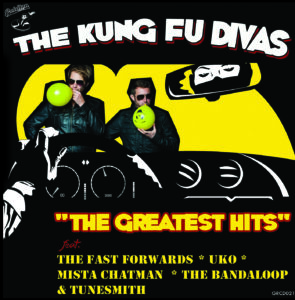 For anyone interested in a origin-story, read this – everyone else please skip this paragraph:
Florian Waitzbauer and Michael Lachsteiner first met when they both were promotion managers with the short-lived austrian branch of Rough Trade Records. As soon as this outlet got digested by BMG, they started to do music, more or less together with the motley crew of new friends they found through their work. Already the first single, which actually really started as kind of a joke, “The Universalist featuring DJ Collage”, gained a lot of airplay, and not only in Austria. They sure never will forget the frantic mexican radio DJ who called in the middle of the night to GIMME SOME MORE MUSIC OF YOURS. And they’ll never forget to omit any phone numbers on any postings, anywhere. But as the music business is a harsh and miserable mistress, the duo went on to pursue other things in order to pay the rent, but still released one or two tracks or remixes every year, with the occasional live-gig thrown in for good measure.

But now they found that it would be about time to do the right thing, which in this case is a full length album. Lots of tracks have been gathered over the years and the time for a selection, a singles collection so to say, seemed quite right. Incidentally, it’s christmas – this most wonderful time of the year, when best of-albums rise from their shallow graves and roam the earth once more. But now let’s hear what they have to say for themselves:

“We love Kraftwerk, Kyuss, KLF, The Cure, LFO, The Ramones, Cabaret Voltaire, L7 and a lot more. For whatever mysterious reasons all those influences seem to match when it comes to produce our own style of electro/rave/breaks/house-mixture, maybe it’s just because of that.” the band claims and demonstrate that they aren’t afraid of shameless name-dropping.

And here already are some answers to the most burning questions (out of experience):

*our favourite colour is red, or blue
*our favourite food is deep fried heel of the hawk with two or three helpings of breaded spaghetti
*yes, we made all this music on our own, really, and the singers also sang themselves!
*50% of the band are single, everyone else has children
*we are called The Kung Fu Divas just because or respectively, the name has been lying around and no one wanted to take it, so as an act of selfless charity, we adopted it and here we are.