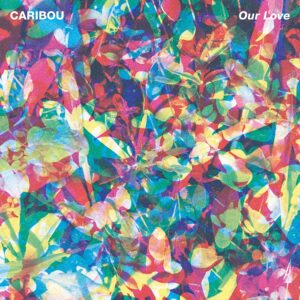 Although “Our Love” is already the third album under his artist-moniker CARIBOU, Dan Snaith, has a lot more releases under his belt of which most people probably aren’t aware of. Having started to release music as MANITOBA in 2001, the canadian thirtysomething received much critital acclaim for his multi-faceted IDM and folktronic pieces, most notably with the second album “Up In Flames” in 2003. Adding this third alias, DAPHNI to the list, the new CARIBOU-album marks number 8 in the full-length-albums produced by Snaith. A rare thing to do in times of ultra-short attention spans from artists and listeners alike. But for a musician with passion and drive, this surely is irrelevant. Snaiths works is always characterised by an extreme love for detail and subtlety and sounds that are a bit off, his art is complex and intriguing, yet accessible – best emodied in his smash-hit “SUN” from 2010. But now back to the new stuff, the most recent album “OUR LOVE”. The opener “Can’t Do Without You” is a melange of the perfect state-of-the-art dance-tune with almost painful, soliciting  lyrics about – you guessed it – an absent or gone lover.

The album is a very personal one, encircling many and mostly hazy themes of love as a core-theme and also the music has changed since the last CARIBOU-album “SWIM” from 2010: Where SUN gave a lot of room for shere dancing bliss, OUR LOVE is the equivalent to a smothered laugh about a joke that only seemed funny. It’s all there – the grooves, the beats, the sounds of a sophisticated club but it also features a deeper layer, that carries a different tune. If SUN was the enthusiams of a newly found love, OUR LOVE is the contemplation of the long term and the struggles that come with every relationship. Sometimes plain strange and outlandish, sometimes just beautiful and intimate, but always rich and detailled and most of all lovingly crafted, OUR LOVE is definitely an album for more than just a quick listen. It is definitely worth it.