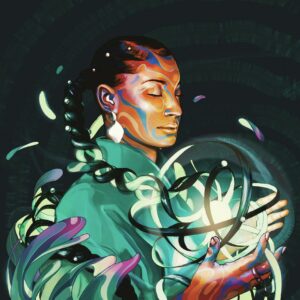 Nubya Nyasha Garcia, born in 1991 in Camden to a Guyanese mother and a father from Trinidad is one of the most praised new forces in jazz, mixing various influences from electronics to dub and reggae, classical music, soul and bebop, dubstep and african music to almost whatever comes to mind. Garcia blends a sheer endless stream of ideas into one surprisingly coherent stream of sound. So it’s almost an obvious choice to invite even more diverse artists to try their hands on Garcias work and create a full album of remixes and versions of her highly acclaimed debut album “Source” from 2020. Among the invited are Dengue Dengue Dengue, Moses Boyd, DJ Harrison, Kaidi Tatham, Georgia Anne Muldrow – just to name a few. All in all, “Source # Move” is a modern take on jazz itself, embracing not only the rich history of the genre, but infusing it with tons of new ideas.