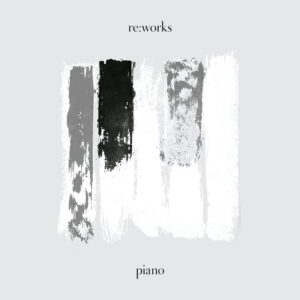 After receiving mixed reviews for the first compilation of reworks from the Decca-catalogue, the label obviously decided to choose a more consistent path for the second installment and here we are with “re:works piano”. This new reworks collection of pieces by Debussy, Satie, Chopin, Beethoven, etc is more or less a collection of what may sound like edits or cover versions and not actual remixes in the straightest sense, undoubtely due to the fact that most of the original pieces are very well known and feature some of the most recognizable melodies of more or less modern classical music. Also, who would point out which interpretation would be the original? Therefore a radical adaption or a drastic re-interpretation would surely be quite an undertaking of some sort and pose lots of difficulties in terms of the creative challenge and the risk of getting torn apart by critics. But apart from the contemplation of the creative weight of this compilation, it’s tracks shine an interesting light on the use of melodies in contemporary electronic music. In times of minimal, beat-driven electronic music (of course, there’s nothing wrong with that), intricate and romantic melodies seem to become a rare treat as their usage is often dubbed as kitsch. I won’t open a discussion about what this would or could say about contemporary society, at least, it’s just the way is see it – and hear it. Some critics bemoaned the light-touch-approach the remixers of “re:works piano” took with mostly underlaying the melodies of the originals with a beat-and-bass-carpet and only compress their arrangements instead of reworking them to a somewhat casual and arbitrary result. I beg to differ as it could also be seen as a respectful upgrade and, not mentioning the possible educationary approach, ahem, a nice way to be reminded of how sweet and tender Erik Satie’s music is and how influential his music has been – for example. Although i still not get it why Beethovens Moonlight Sonata would need a rework or an addition of beats as in my opinion this is one of the most wonderful and perfect pieces of music ever conceived, I can still enjoy lots of other pieces in this collection. “re:works piano” is one of those rare albums that change their effect dramatically depending on the volume you play it at. Play it at casual volume, it will maybe even bore you, the sound diffusing into the air and leaving next to no impression. But play it at a higher volume, the beauty of the originals will shine anew with a solid and meaningful new character through the addition of the applied electronics and the tightened arrangements. So, don’t be a snob and enjoy the music without the cargo of the pieces’ history. I’m sure if you could try to forget where those music originally came from, some might say that “re:works piano” is an excellent, subtle and contemplative electronic music album. So – please just enjoy.